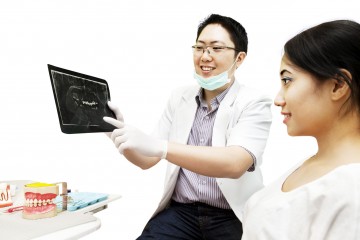 If your feet, hands or any part of the body bleeds when you wash or touch it, you would get concerned and probably call your doctor or go to the hospital. However, most people think it’s normal that their gums bleed when flossing or brushing. Periodontitis, also known as gum disease or periodontal disease, is an infection of the teeth or around the teeth, which includes the gums, the area that covers the root, bones and more. In most cases, the initial stage of periodontal disease is gingivitis, which means the gums become inflamed. If not taken care of soon, it can lead to more severe problems.

Scientists have been working hard to determine the cause of periodontitis gum disease and now have a firm grasp of the situation. Bacteria is the main reason, but many wonder how the bacteria get into the gums or onto the teeth. Some say it is because of the food you eat already containing bacteria, but in most cases, it is the plaque that forms on the teeth that are the culprit. Plaque is made of bacteria and also holds more bacteria, which can lead to soreness, inflammation, swelling and bleeding.

National Periodontics believes that the best way to cure periodontitis gum disease is to prevent it from happening. While certain things cannot be helped, such as your genes, other factors can be avoided.

For example, smoking and using tobacco products of any kind can increase your risk of getting gum disease. If you already have it, smoking will make it worse.

Likewise, grinding, clenching or gritting your teeth may not cause the disease, but can lead to it becoming severe more quickly because they’re inflamed, and you’re exerting more force on the teeth, which hurts them and speeds up the bone breaking down.

Likewise, misaligned teeth, crowded teeth and anything that makes it tough to brush and floss can lead to tartar and plaque build-up quickly.