Pin It
Home
Business
Live Golf – You Can Watch It Anywhere
Download my Ebook
Start Earning Today!
Tweet Pin It 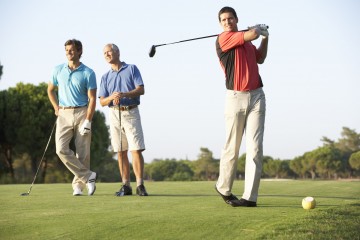 Many people love golf and want to see everything in real time (live). If you’re such a person, and you’re wondering how to do it, you should know you’ve got three option, and some are better than others. These include going to the tournament venue and watching it, viewing on television/cable or live streaming.

The competition version isn’t likely to be the best solution for your live golf needs. For one thing, they may be in different countries, depending on what type of tournament it is. You’ll need to plan far in advance to get airline tickets, rental transportation, accommodations and tickets to the event. If you want to view live golf frequently, it can prove too costly.

Another option is to watch cable or television, which is less expensive than the real thing. However, most of these aren’t filmed in real time. They’re recorded and shown at a later date. Therefore, you may not have all the most up-to-date information.

In most cases, broadcast television won’t show the tournaments you want to see. You’re at their mercy, but you could still be at the mercy of your cable company. Most sporting channels are premium and require you to pay even more. Likewise, you may be able to find on-demand or PPV options on cable, but they can cost a lot, depending on which tournament it is.

Your best bet is to live stream your golf events. As long as you have the internet and a device (computer, laptop, smartphone, tablet, etc.) you can watch golf in real time, as it happens. Many times, live-streaming systems are PPV (pay per view), but they can be less expensive than cable subscriptions.